The rush to judgement

via The rush to judgement

The rush to judgement

I had a lovely couple of days in Wales, doing a talk for the Caernarfon branch of Yes Cymru. It was a fantastic evening, and the venue was packed out. In fact it went so well that now Yes Cymru is considering organising a national tour of Wales for the dug. I’ll get to tag along too. The news about Alex Salmond’s resignation from the SNP broke when I was away. That was what the British parties and the anti-independence media had been calling for ever since the allegations against the former First Minister came to light last week. You’d think that his resignation would have made them happy, but no.

Instead of being satisfied that Alex Salmond had done what the British parties and media had been demanding that he do, demands that were loud and shrill, they’re now working themselves up into a froth of indignation because he…

The shape of futures past

via The shape of futures past

The shape of futures past

There’s a very peculiar trope which has developed amongst opponents of independence of late. It was seen in an article in the Daily Mail, or to give it its proper title the Daily [spit] Mail, by one Stephen Daisley. It was seen on Tuesday of this week in an article in the Herald by Andrew McKie. That trope is whatiffery. They compare the real universe in which we are actually living with an entirely imaginary universe in which Scotland voted for independence in 2014 in order to say that things are either not so bad just now, or would have been far worse in their Mirror Universe of sub-Star Trek fictioneering.

Just imagine all the horrors that would have happened if Scotland had voted Yes in 2014, they write. The arse would have fallen out of the oil price, and England would have been forced by the EU to put… 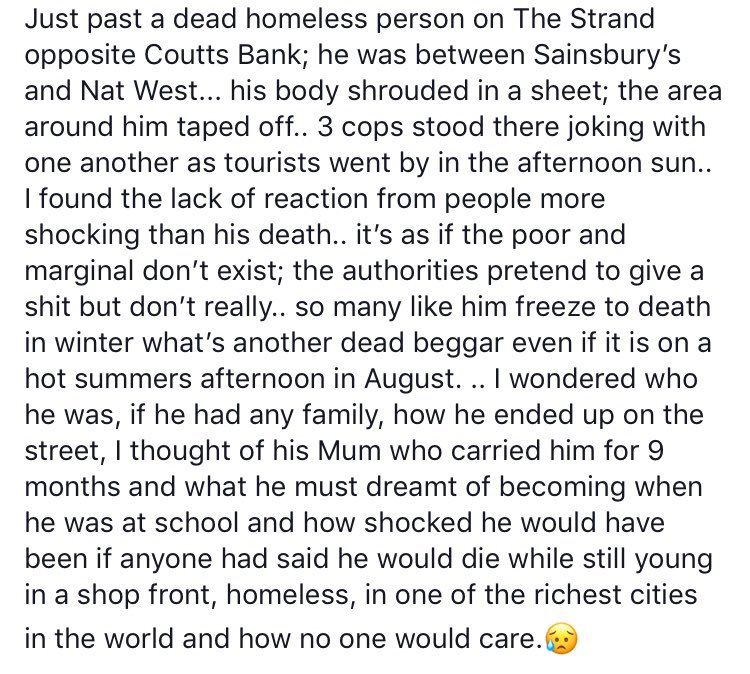 Hard to take this in. But apparently, it’s not that unusual on the streets of London, where, according to Mike Dailly’s Tweet, a homeless person dies on average every couple of weeks. This, as the post says, in supposedly one of the richest and most advanced cities in the world.

Much has been made of the fact that in October one of Andrew Saxe-Coburg Gotha’s daughters is getting married. She is styled and titled Her Royal Highness, Princess Eugenie of York. She is apparently 9th in line to the throne and has absolutely not the remotest chance of getting it. She does no public duties at all. She does, however, go on a LOT of holidays. It is her claim to fame.

However, she has decided that she wants an open carriage procession through Windsor, just like her cousin Harry (5th in line) got.

via Don’t call us, Jeremy